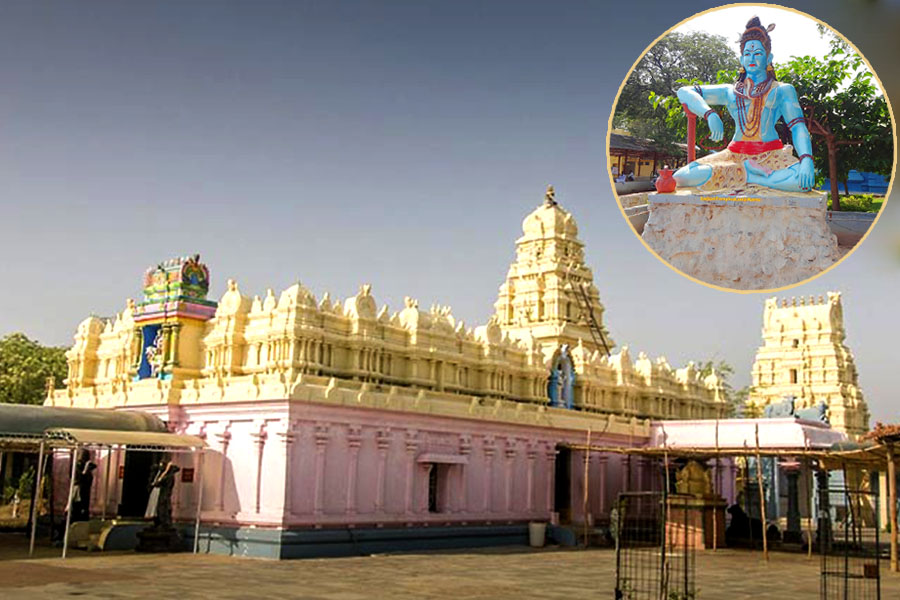 Kaleshwara Muktheshwara Swamy Temple is the holy place of deity Maha Shiva. From many sacred places of his appearance on the land, Kaleshwaram considered one of the most spiritual places. Discovered in the southern part of Telangana state in Kaleshwaram village this Hindu temple is having a great history.

Kaleshwara Muktheshwara Swamy Temple is one of the famous and ancient temples in Telangana State. Many pilgrims visit Kaleshwaram every year to worship two Lingas on a single pedestal.

Kaleshwaram temple is one of the popular and ancient temples in Telangana State. Temple is established and built by Rajaiah and Satyavati Devi Daram. The significance of Kaleshwaram is two Lingas on a single pedestal. One of the linga is Lord Shiva, and the other is Lord Yama, the deity who orders upon the death of mortals and time. As so the name Kaleshwara (Lord Yama) and Muktheshwara (Lord Shiva) came into existence.

It is said that the water poured on this lingas travels to the Godavari River located near by the temple. Even now it is a mystical concept for the people. This place is known as second Kashi or southern India Kashi for its history of holiness.

Lord Shiva determines the end of our life cycle and commands Lord Yama to end the mortal life as per the life cycle. People were attaining salvation and causing an imbalance in nature.

Lord Yama worships Lord Shiva to retain the life cycle. Thus, Lord Shiva was pleased with the prayers of Lord Yama and asked to install the Muktheshwara linga next to Kaleshwara linga on a single pedestal. It is believed that devotees who prayer lord Shiva here will attain moksha, relieved from the birth cycle.

The entrance of the temple has a huge staircase, alongside of floral shops, security and prasadam counters. Camera and cell phones are strictly not allowed inside the temple. You can hand it over to the security stall people at the entrance by paying some fee. After entering the temple you can notice the garden on the right and the left side comprises of prasadam preparation space.

As you walk on to the left there is yama kona. Walk straight along and you may find sanctum with doors on four sides. Inside the sanctum two lingas on single pedestal is worshipped. The mesmerizing aura inside the sanctum wakes the divinity in you.

Once you exist the main sanctum to the right there is the Durga matha temple. The corridor of the temple is wide and has the sculptures of the god and goddess. They also organize different types of pooja at these idols.

Kaleshwaram as known bestows people with their desires and presents moksha. Many devotees visit this place to let go off the astrological disturbances in their life. To rectify the same few rituals are conducted at this temple. Kaleshwara Muktheshwara temple is famous for the Kalasarpa Dosha Nivarana.

Few of the pooja & seva conducted at the Kaleshwaram Temple are:

Alongside this pooja, many other customs are performed by the priests at the temple. There will be different prices and the appropriate timings for every pooja.

One of the auspicious days for Lord Shiva is the Shivaratri. The day marks the marriage of Shiva and Parvathi. The entire devotee worships the deity in various forms. Fasting, Pooja, Jagran, and many more rituals are done in honor of Lord Shiva.

Lakhs of people travel to Kaleshwaram on the auspicious day to visit Lord Shiva. They also pour milk and water on linga considered as a sacred ritual.

Kaleshwaram Temple located in the beautiful southern village of Kaleshwaram, Mahadevpur Mandal, at Bhoopalpally district of Telangana State. The dense forest, along the way it surely embraces divinity. This place also has excellent geographical attention with Triveni Sangamam and Kaleshwaram Lift irrigation project.

The location from the famous and nearby places:

TSRTC Buses from the Hyderabad and Karimnagar to Kaleshwaram are available occasionally. TSRTC buses from Manthani and Warangal observed frequently.

It is also connected to the Maharashtra state through Sironcha, which is 16.5 kilometers away.

Godavari River is one of the holiest rivers in India. It is believed that the holy bath in this river will purify the sins of the people. Originated in the Triambakeshwar, this river flows along with states of Maharashtra, Telangana, Andhra Pradesh, Chhattisgarh, Odisha, and it reaches the Bay of Bengal.

Godavari River flows at kaleshwaram alongside pranahita. As the two rivers flow, the illusionary Antarvahini is created, the river Saraswathi emerges from it. Thus place is also widely known as Dakshina Triveni Sangamam. It is also believed that milk or water performed as an abhisheka pooja will flow through the linga and evolves at sangamam.

A large number of devotees visit it in the month of Kartika Masam (months of November and December) and on the Shivaratri to take the holy bath and to perform the sacred rituals along the riverbank.

People also come here to immerse the ashes of their families. As the river is considered holy, they believe by immersing ashes the soul of the person will attain moksha.

Pushkaralu is an Indian festival celebrated to worship the holy rivers in India. It is observed once in every 12 years alongside 12 rivers. People from different places in the country visit the sacred rivers and takes a bath. They also perform the pooja alongside streams. Godavari River in Kaleshwaram draws the massive crowd at the time of pushkaralu.

Kaleshwaram Lift Irrigation Project is the largest multi-stage lift irrigation project located a few minutes away from the temple. Godavari River is the second-longest river present in India after the river Ganga.

Few other places to visit are:

To know further details or the changes in the timings, please contact the concern temple in charge.