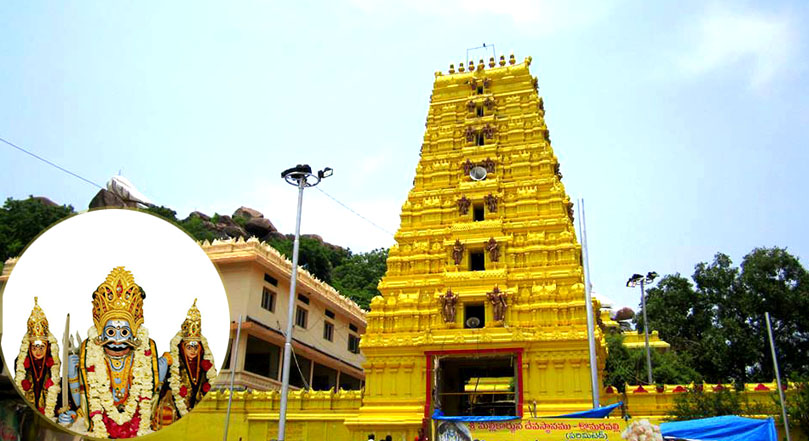 Komuravelli Mallikarjuna Swamy Temple is one of the famous Telangana temples. It devoted to the shrine of Lord Shiva in a fierce avatar. It is located on the hill of the Siddipet district in Telangana state. Famous for the legends, Komuravelli Mallanna history portrays the marriage of Lord Mallanna to Goddess Medallamma. This ancient temple in Telangana attracts lakhs of visitors every year.

Mallanna Oggu Katha states the incarnation and the life of Mallanna. Oggu Katha is the musical rendition of Komuravelli Mallanna temple history. People at this place narrate the Oggu Katha. They describe how Lord Mallanna got married to Medallamma, also known as Goddess Bramarambika. According to Oggu Katha, Lord Shiva has to fulfill the wishes of two brothers of Medallamma for marrying her.

Komuravelli Mallanna history defines the ancient culture and its significance orally. This temple also holds sentiment for religious values. The heads of the committee who perform the rituals are believed to be from just two communities.

There is also one more legend, according to Maharashtra people, which says that Lord Shiva manifested himself at this place. The deity here, also known as Khandoba by Maharashtra people. Komuravelli Mallanna Katha makes this places one of the Top 10 Famous Temples to Visit in Telangana.

The Komuravelli Mallanna temple devotes to the main deity Lord Shiva. Lord Mallanna, along with his consorts Goddess Medallamma, Goddess Kethamma, Goddess Ganga, and Goddess Parvathi idols, dwells here. Lord Shiva is in a statue and not in the usual form of linga.

The deity Mallikarjuna Swamy is 8 ft height and located in a cave on a small hillock. Lord Mallanna at this temple is in blue with four arms, and also has a big mustache. The upper two hands hold the serpent and trident, whereas the lower two hands hold a bowl and stick. Komuravelli Mallanna Images portray the aggressive appearance with the description as given above.

The colorful and majestic Komuravelli Mallanna Temple attracts many pilgrims every day. Devotees visit the temple to seek the blessings of the Lord Mallanna and his consort goddesses. The following Pooja & Seva are performed at the temple by priests,

Komuravelli Mallanna Temple has the above pooja. One has to buy the ticket to be part of the pooja done by the priest. The things required to do the pooja will be available near the temple. The komuravelli mallanna temple timings and prices for the pooja may differ on special and festival days. One has to contact the temple in charge for the same. Makara Sankranti, Sivaratri, and Ugadi festivals are celebrated very grandly here.

The pedda Patnam celebrated grabs much more attention. People from various places visit the Lord Mallanna to seek blessings on these days. Jatara organized in January is eye-pleasing scenery. Special pooja and seva are performed on these festivals.

The Komuravelli Mallikarjuna Swamy Temple, located in Siddipet, is unique in every way. For which it is one of the Famous Temples in Telangana. The temple mentioned can be helpful if you plan to visit the temple.

Komuravelli Mallanna Temple timings may differ on the special and festival days. Please contact the temple in charge for further information.

Mallikarjuna Swamy temple located on the hillock of the Komuravelli village of Siddipet district in Telangana State. This pilgrimage has the serene divinity in the environment. The hillock location and the cave architecture of the temple attract many tourists. You can visit this temple by travelling to Siddipet.

The frequency of buses from the Siddipet and Hyderabad is high. Below are the given distance from few places to Komuravelli Mallanna Temple location.

Nearby Tourist Places to the Komuravelli Mallikarjuna Swamy Temple

Komuravelli Mallanna Temple mesmerizing features grab many visitors to this place. There are also a few more places near this temple that might be of magnificent scenery.

Koti Lingeshwara Swamy Temple: It is located 28 kilometers from Komuravelli Mallanna Temple. Lord Shiva is the main deity at this temple. The uniqueness of this temple is mesmerizing and can only felt by visiting.

Visit these amazing divine places for the spiritual awakening of your inner self. Please follow the temple website for further updated details of the timings and the pooja details.