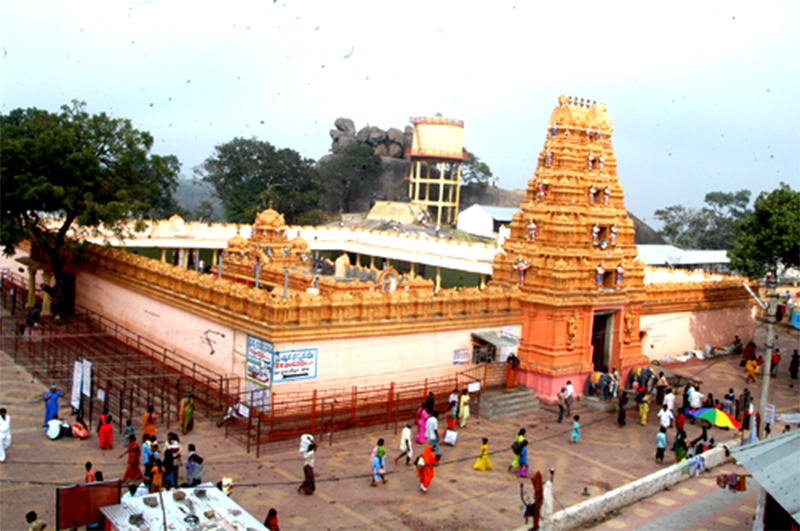 Kondagattu Anjaneya Swamy Temple is one of the Famous Lord Hanuman Temples in Jagityal and Karimnagar Temples. Devoted to the deity, Anjaneya Swamy regarded as “Sanjeeva,”  the cure for mentally disabled and unhealthy people. Located hillock in Muthyumpeta village of Mallial Mandal, Jagitial district, it is believed to be older than 300 years.

The stunning temple of Sri Anjaneya Swamy in Kondagattu is eye-pleasing to visit. Sri Anjaneya Swamy temple holds the legacies about its establishment. One of the famous legends says that three centuries ago, Sanjeevudu named cowherd has built the original temple. One day after losing his oxen, in search of it, he went into the hills and fell asleep. In his dream, the Lord Hanuman has told about the oxen whereabouts.

The next moment when Sanjeevudu woke up, he started following the same directions as told by the deity Hanuman. Later he found his oxen and also discovered an idol of Lord Hanuman. Sanjeevudu also built a small temple devoted to Anjaneya Swamy.

The original temple located on hillock later got renovated to its present look. Krishna Rao Deshmukh in the twentieth century has refurbished the Sri Anjaneya Swamy Temple. One of the well-known aspects at Kondagattu temple is 45 days of prayers. Couples with no children when praying the deity for 45 days can be blessed with a child. Also, mentally ill people after offering prayers at this temple, will be healthy and normal again.

Hanuman Jayanthi celebrated wonderfully at this temple as to commemorate the birth of Lord Hanuman. It is believed that lakhs of devotees visit this Famous Temple in Telangana on the auspicious day.

The alluring structure of the Sri Anjaneya Swamy temple is magnificent. Kondagattu Temple located amid trees on the hill at Mallial Mandal. One of the beautiful and Famous Temples in Telangana is Kondagattu Temple. The entrance of the temple has 16 pillars. The walls of the temple are carved beautifully with sculptures of God and Goddesses. Devotees perform circumambulation in the spacious and elegant corridors of the temple.

Every year lakhs of devotees visit

Kondagattu Anjaneya Swamy Temple to offer prayers to Deity Hanuman. They also perform pooja and seva here. Pooja and seva performed at the temple are:

The priest will perform pooja and Seva at the temple. The Kondagattu Temple Timings for pooja may differ on the days of the festivals and special days. Devotees have to contact the temple in charge to know further information regarding the same. The pooja and seva supplies can be available in the temple premises. You can purchase them before entering into the temple.

Devotees who wish to visit Kondagattu Temple can note the following timings for a time-saving journey.

The temple timings mentioned above may differ on special days and festivals. Request to contact the temple in charge for the further details. The duration of the seva and other events may extend based on the day. Tuesday and Saturdays have seen most devotees than any other days.

Sri Anjaneya Swamy Temple, located on the beautiful hillock, is surrounded by a spectacular view. It is also known as one of the most popular places to visit in Telangana state. The greenery at the place makes you mesmerizing. You can drive in a car or RTC buses. The frequency of buses from Karimnagar and Jagityal to Kondagattu is very high. The area also has private vehicles that you can hire to reach the temple. The Bus reaches the bottom of the hill, from there on you can take the auto to the hillock.

Kondagattu Temple is 15 kilometers from Jagityal,

People who wish to stay near to the temple of Kondagattu can stay in the Haritha Hotel. It is just 2 minutes away from the temple premises. Online booking may not be available at present. Pilgrims are requested to visit the hotel direct to make the booking over the counter. People can find private accommodation at the bottom of the hill.

Kondagattu also has a few other amazing places to visit. Places near Kondagattu temple, such as Kondalaraya Fort and Bojjapotana caves, even grab the attention of the tourists. Situated closer to the temple, these places are must visit on the list.