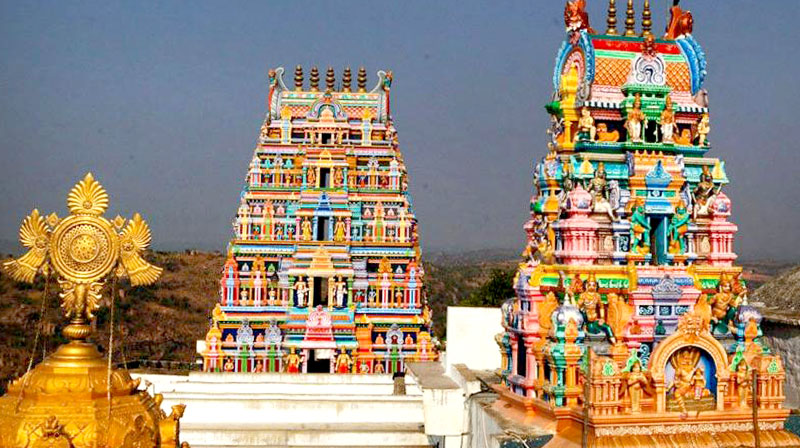 Yadagirigutta Temple located in the Yadadri, is the holy place devoted to worship the deity Narasimha. Yadadri is also known as Yadagirigutta.

It is one of the most famous temples in Telangana having a vast number of tourists at present. There are notable historical legends which tell about the stories of the establishment of the temple.

There lived a sage who is well known as the Yadadri, son of the famous sage Rishyasrunga and Santa Devi. With the blessings of Lord Hanuman, Yadadri performed penance in the cave. Impressed with the dedication of the Rishi Yadadri, the Lord Narasimha, the incarnation of Lord Vishnu appeared in front of him.

Later the five forms of Lord Narasimha have sculpted and worshipped as Pancha Narasimha Swamy. After many years of sage yadadri penance, Lord Narasimha appeared in the dream of the lady tribal devotee. The deity was immensely pleased with her devotion. In her dream, god directed her to a large cave where Lord Narasimha revealed all five forms.

Yadagirigutta Lakshmi Narasimha Swamy Temple has the Sudarshana Chakra at the top of garbha gudi. Sudharshana Chakra is an adornment and a weapon of Lord Narasimha.

The brightness of chakra is visible from six kilometers far and said to be having the mystical powers. Legend says this chakra works as a compass and directs the devotees towards the temple. The abode of the deity mentioned in one of the most popular Puranas, Skandha Purana.

The 12 ft high and 30 ft long sculpture of deity located inside a cave, around which temple built. To reach the main temple, one needs to get to the top of the hill. Amazing architecture of this abode is spectacular to visit.

The chief minister of Telangana state, Mr K Chandrashekhar Rao has initiated the renovation procedures at the Yadagirigutta temple. The final layout has approved with an overall budget of Rs. 1800/- crores.

The renovation work has started in the year 2016 by Yadadri Temple Development Authority. Chinna Jeeyar Swamy who has renamed the place as Yadadri is also guiding the renovation process.

The temporary temple is being constructed and called as Balalayam. The new temple renovation is expected to be completed by the end of 2019.

Pooja is the sacred ritual customarily conducted by the priest. It enhances the spirituality in the devotees. There are many kinds of Yadagirigutta temple poojas which performs as per the schedule.

Every occasion has the dedicated special pooja done by the priest. Based on which one can buy the tickets of the pooja at the ticket counter and can proceed further. The details of pooja & seva listed as below,

As per the pooja, you can carry the necessary things related to it. You can contact temple priests for the items you may need during the ritual. The same will be available at the vendors outside the temple.

The concerned temple authority operates the Shrine of Lakshmi Narasimha. The temple has consistent schedules for a smooth darshan and poojas of the devotees. The Yadadri temple Timings are as follows:

The timings mentioned in the above lists can vary on the special days and festivals. Contact temple in charge for further details

Lakshmi Narasimha Swamy Temple located on the beautiful hillock. Surrounded by a spectacular view, it is one of the most popular places to visit in Telangana state. You can drive in a car or RTC buses. Frequency of buses from Hyderabad is very high. The area also has private vehicles which you can hire to reach the temple.

Lakshmi Narasimha Swamy Temple in Yadadri has the cottages, dorms, and rooms. There are more than 250 AC and Non AC rooms available as per your comfort. The number of room cost and type mentioned in the list below:

The cost of room rent may vary based on the facilities provided. Rent starts from Rs. 50/- to Rs. 2,000/- per day. The temple provides water facilities for the pilgrims. There are many security personnel who take care of safety around the place.

Nearby tourist places from Yadagirigutta Temple

Surendrapuri: The famous tourist place in Yadagirigutta at a distance of 2.8 kilometres from the Lord Narasimha temple. It is a fantastic information centre with the mythological concept. Surendrapuri has sculptures of many god and goddess.

Bhongiri Fort: It is an ancient fort at the hilltop. If you are looking for a fantastic experience of climbing, then this can be your favourite. The hill lets you have the mesmerizing sunrise and also the pleasant sundown. It is located at 9.8 kilometres from Yadagirigutta temple.

Jain Temple: Jain devotees from all over India come here to worship the deity. It is a shrine of the Bhagavan Sri Swethamber Jain Theerth. Jain Temple is approximately 6 kilometres from Alair Mandal and 22 kilometres from the Yadagirigutta Temple.

Few more temples near Yadagirigutta temple which you pay a visit are:

Explore the spirituality within you to the core by visiting the famous Yadagirigutta Temple.